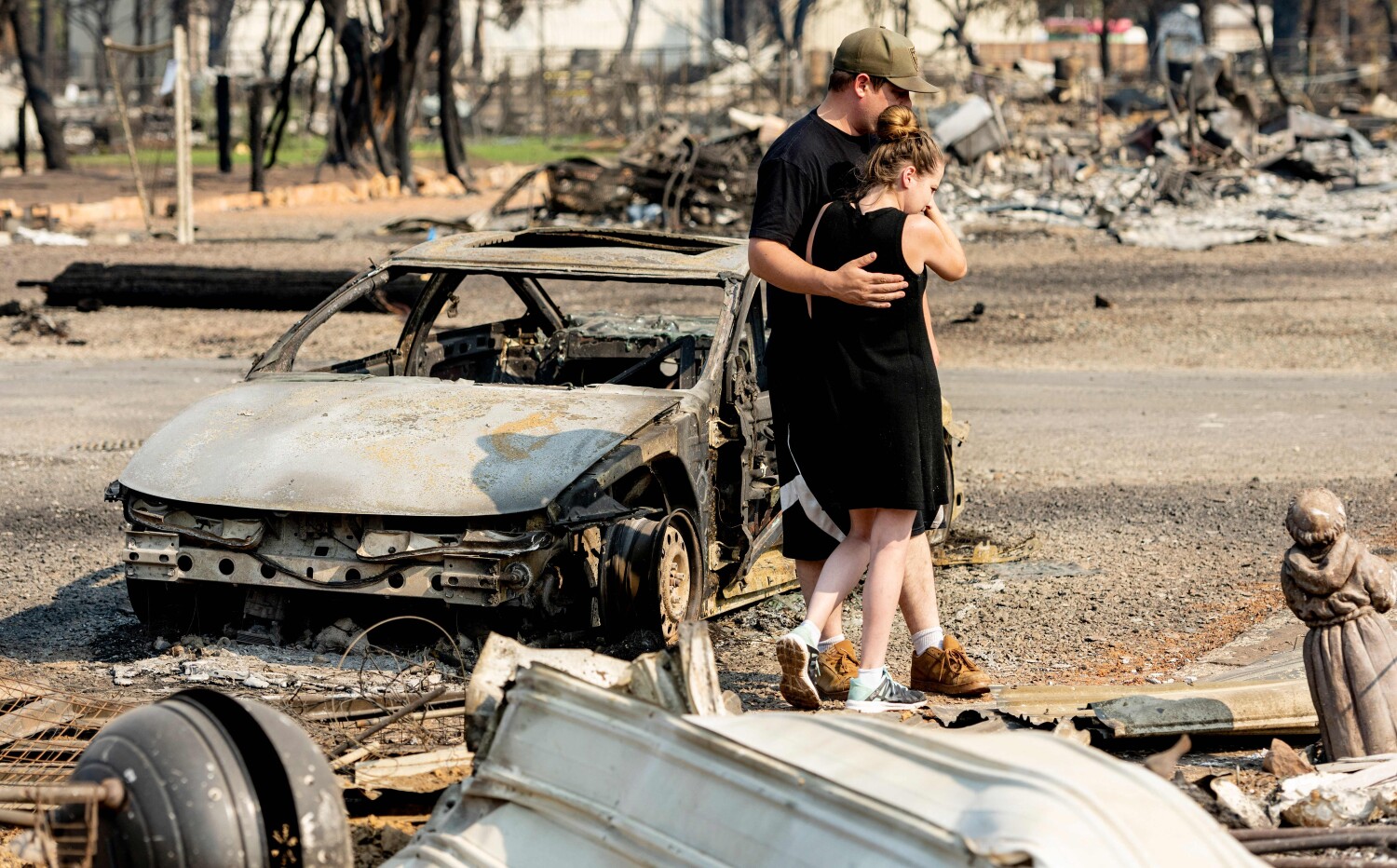 Fall is almost always a race between intense seasonal winds and the arrival of rain. Officials say the next few months look considerably dry and dangerous.

The summer brought fires of rare ferocity that leveled the town of Greenville. For the first time, flames swept from one side of the Sierra to the other. Drought conditions and rising temperatures spurred by climate change have left the landscape bone-dry and ready to explode.

Fire officials and climate experts fear deteriorating conditions in Northern and Southern California as the hot October and November winds that fuel some of the most disastrous fires take hold with little rain on the horizon.

Chief Thom Porter of the California Department of Forestry and Fire Protection said the acreage burned this year is keeping pace with 2020, the state’s worst wildfire season on record. About 4.2 million acres burned that year, and many of those fires — including the devastating Creek and Glass fires, and the Bobcat fire in Los Angeles — did not ignite until September.

“We’re right smack in the middle of wildfire peak season,” he said. “Everybody needs to remain vigilant.”

Even more sobering, officials said, is the fact that six of the largest wildfires in the state’s recorded history have happened since 2020.

“Last year was seen as an insane year in California,” UCLA climate and fire scientist Park Williams said. “It may have been easy to say, ‘That’s a one-off event. We’re not going to see another year like 2020 for quite some time.’ And now, the very next year, we’re seeing a year similar.”

Combined, the latest statistics are reflective of the state’s worsening climate crisis, in which wind-driven wildfires are feeding on drought-riddled terrain that has been heated and primed to ignite at the first sign of sparks.

Porter said the forecast for the coming months could spell even more destruction.

“For September through December, the entire state shows drier, more wind events, and large fire activity to continue,” he said.

Indeed, many of the factors that have fueled California’s conflagrations are likely to get worse before they get better. The dry vegetation that worried firefighters in July has only gotten drier over the rainless summer months.

At the multicounty Dixie fire in Northern California — the state’s second-largest wildfire on record — incident meteorologist Jack Messick said dryness was fueling the ever-growing blaze, which surpassed 900,000 acres this week and could soon join last year’s August Complex in the record-shattering million-acre category.

“For the next seven days, we expect no precipitation at all, which is what this fire really needs,” Messick said Monday. “It’s not there.”

And although many of the state’s fires this year have been fanned by strong wind gusts, the seasonal Santa Ana and Diablo winds typically arrive in September and October.

“This is the grab-bag, wild-card time of the year, where we wait with bated breath to see what the offshore wind season has in store for us,” said John Abatzoglou, an associate professor of climatology at UC Merced.

Already this month, winds of up to 40 mph helped propel embers from the Caldor fire over a granite ridge that many believed would act as a buffer for the popular resort town of South Lake Tahoe.

More than 4,000 firefighters — including personnel from the California National Guard and U.S. Army — were able to defend Tahoe in a days-long, all-out fight, but many said the flames got too close for comfort.

In the Christmas Valley neighborhood of the Lake Tahoe Basin, charred trees and rocks perched behind two-story homes showed just how close the fire had come.

“It is really sort of a game of what comes first,” Abatzoglou said. “Significant offshore wind events with ignition, or that glorious half-inch of precipitation.”

The Caldor fire, which has seared more than 217,000 acres and destroyed at least 776 homes in roughly 3½ weeks, was 50% contained Wednesday.

Though the progress against the fire was significant, there is “a lot more work that needs to be done,” said Dusty Martin, a unified incident commander for the fire’s west zone — work that could be complicated by scorching temperatures and the threat of cloud-to-ground lightning.

Over the next few days, low pressure is forecast to move in from the coast and push the high pressure east, bringing a chance of thunderstorms. The storms carry a potential for rain but also dangerous lightning, said Brian Brong, a meteorologist with the National Weather Service’s Reno station.

Of primary concern, he said, is the possibility of lightning igniting new fires on historically dry vegetation. The threat of storms developing over the Caldor fire is highest Thursday night and into Friday, when winds are also expected to increase.

Northern California faces “significant fire potential” through at least November, the outlook says, with vegetation moisture levels “below critical values in most areas.”

The region received less than half of its normal precipitation for the rain year, which runs from Oct. 1 to Sept. 30, and troughs of strong, dry air are expected to persist into September.

“These strong troughs will continue to bring strong winds that will elevate the potential for new fires with extreme fire behavior and rapid spread rates,” the outlook said, “and exacerbate efforts to control the many large ongoing wildfires.”

The outlook is similarly bleak for Southern California, which so far has seen less fire than the northern part of the state. Above-normal temperatures, below-normal rainfall and regular Santa Ana winds are all expected in the region through December.

Williams, of UCLA, said Southern California has fared better this season because the drought has been felt more acutely in the northern part of the state.

But Southern California also “tends to see much more of its really big fires come in the fall,” he said, as they are fanned by drought, heat and Santa Ana wind events. A record-breaking heat wave last September also paved the way for several ignitions.

“California could still have a really long road ahead,” he said, adding that the destructive Camp fire in 2018 didn’t ignite until November.

What’s more, the National Oceanic and Atmospheric Administration is predicting at least a weak La Niña in 2021 — a weather pattern that could block storms and moisture from hitting the southwestern U.S., Williams said.

A La Niña would set the stage for another devastating fire season in 2022.

Williams said “we always have luck to hope for” when it comes to the short-term forecast, but noted that human-caused climate change is making good luck harder to come by.

Last year’s terrible fire season — which more than doubled the state’s previous record for acreage burned — is proving to be less of anomaly than everyone had hoped.

“When we think about the longer term, the ‘good luck years’ and the ‘bad luck years’ kind of wash each other out,” Williams said, “and underneath all of that is the thing that isn’t luck — it’s climate change drying things out.”

Porter, who has seen the state’s firefighters face some of their greatest challenges this year in the form of faster, hotter and more intense wildfires, urged Californians not to led their guard down.

As of Wednesday, 2,048,883 acres had been seared across the state, and more than a dozen large wildfires were burning.

“We are on par with where we were last year,” Porter said. “That is sobering. That is the new reality. That is what we’re looking at it.”

Artist Merges Food Items With Animals, The Results Will Blow Your Mind

What is Dyspraxia? Do You Have Any of These Symptoms?