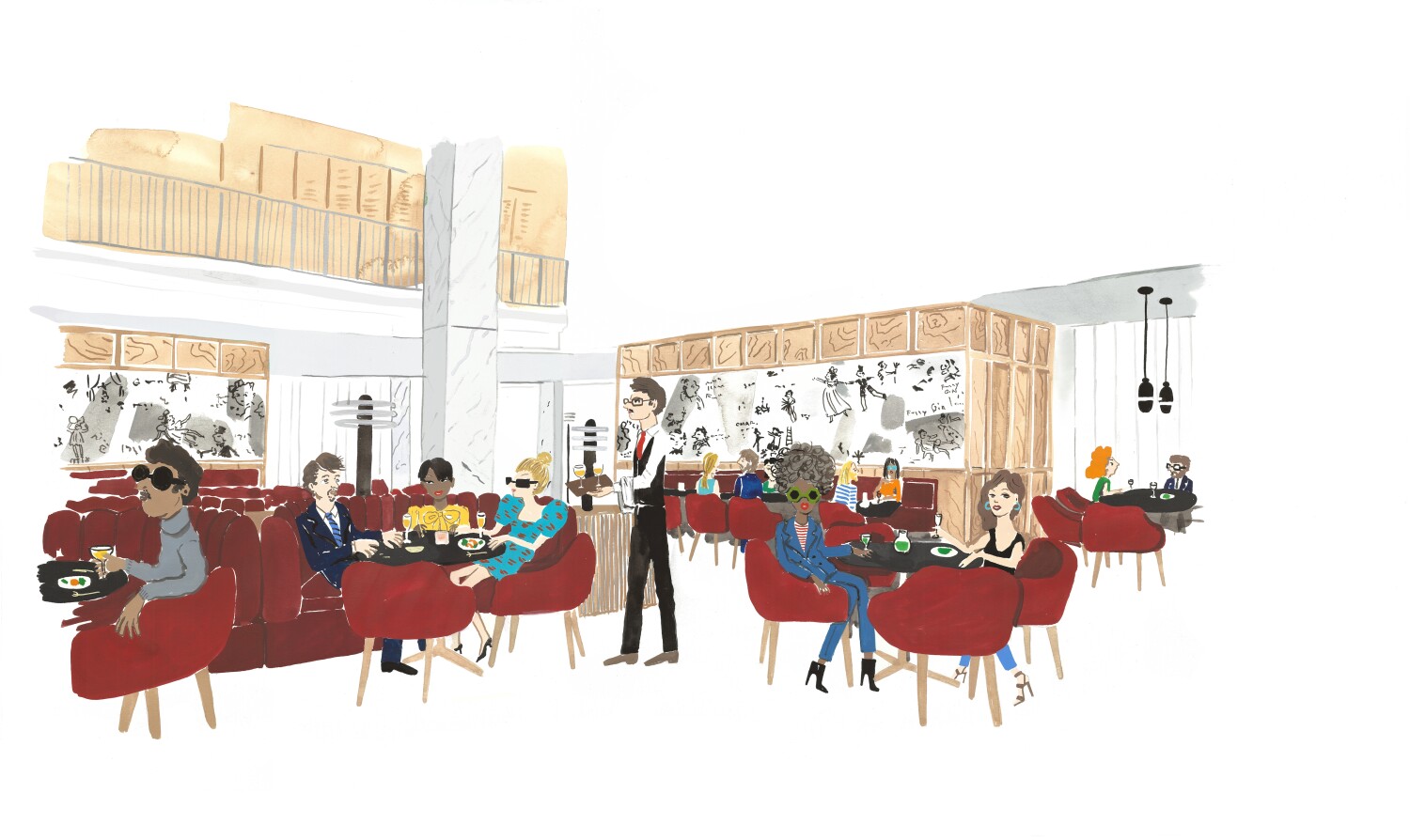 Some of L.A.’s most storied Old Hollywood haunts have gone the way of silent film, but the masterminds behind Fanny’s restaurant in the new Academy Museum of Motion Pictures are working to ensure visitors will still feel traces of that long-ago era.

The museum is set to unveil its sprawling restaurant, bar and prepared-foods counter when the complex opens Sept. 30. And while Fanny’s will be decidedly modern, it also promises to hark back to an era of attentive service and tableside food preparation, an era of restaurants like the Brown Derby and Chasen’s, an era when sitting in just the right spot and being noticed were an art form.

“A lot about this was being seen and how you [got] seen and the dynamic of the restaurant” said managing partner Bill Chait, who, in addition to Fanny’s, helped create some of L.A.’s present-day culinary heavy hitters — République, Bestia, Otium and Tartine among them.

“Some of the things that were famous at the Brown Derby were the booths, and you would see the booths, like here, are really low,” Chait said. “If Tyrone Power was sitting at a booth, everybody walked by and knew that was him and knew he was there. It was an era where stars were very much a part of the dining scene — big, big stars — and part of [building Fanny’s] was to capture this in an appropriate way.”

Chait, along with managing partner Carl Schuster of Wolfgang Puck Catering, which will handle the museum’s private-events fare, spent years considering how they might capture some of the glamor of an Old Hollywood restaurant: How could they resurrect a bygone era known for its full fleet of servers, especially as the country faces a mass shortage of restaurant labor? How could guests feel truly attended to in a tourist attraction that, its creators hope, will pull in 1.5 million visitors annually? How could Fanny’s feel like a destination restaurant that happens to be attached to a museum, as opposed to a museum restaurant serving grab-and-go bites for movie buffs heading to the next film screening or exhibit?

Chait and Schuster settled on an all-day restaurant serving pastries, espresso drinks, and globally inspired tartines, salads and sandwiches from morning into late afternoon, switching to a more formal ambiance in the evening — with hospitality a focus throughout the day.

“What I consider indicative of Old Hollywood is service,” Chait said. “When you had stars come in, you had to serve them. The idea that somebody looked up and nobody came over is unheard of. So what we’re doing is, even if you come out of quick service, we’re going to have hosts that take you to a table, they seat you, they take the number you got and they associate it with your table, so now we know that item 32 is in the dining room over there.”

Guests will enter through the museum’s lobby on Wilshire Boulevard or via the patio just off Fairfax Avenue. Should they come in from the patio, they’ll be immediately greeted by a long glass case filled with prepared items and freshly made baked goods — Fanny’s all-day offerings — and can sit at one of the area’s communal tables or on the patio. Should they enter through the lobby, they will immediately see the bar, the host stand and the main dining room, where guests will be led to a table and get service even if they’re only snacking on a morning bun.

That dining room — a sea of deep red leather, velvet, and mohair booths and chairs — will be the real show, especially in the evening.

During dinner service, Chait envisions sommeliers pouring wine, servers maneuvering with their trays, staff members carving meat or mixing a dessert of zabaione tableside and jacketed captains — a role that is quickly disappearing in restaurant service —checking in on guests while guiding and overseeing the rest of the wait staff. While they’ve already filled a number of prominent positions, members of the management team are still scouting to fill the estimated 150 service jobs. It is, in a sense, a bit like casting a movie or a play.

“It’s a production that starts every night and starts over the next night,” Chait said.

The museum’s architects, Renzo Piano and Osvaldo Maiozzi, envisioned a sort of fishbowl effect where visitors in the lobby could feel a part of this action as well. A wall of glass will allow anyone to view the theater of the dining room — including the low-backed booths from Commune Design, which showcase the diners. An alcove off the main dining room will accommodate a few guests at the base of the museum’s arresting gold cylinder in one corner of what used to be a May Co department store, drawing even more attention to the restaurant and its guests.

On the second-floor terrace above the bar, a 16-seat private dining room includes a sweeping view of most of the restaurant, the lobby, and the walkways and escalators to the third floor of the museum. By opening night that terrace hallway should feature an art exhibit devoted to vaudeville star Fanny Brice, the restaurant’s namesake and the grandmother of donor Wendy Stark (as well as the inspiration for the 1968 movie “Funny Girl”). Plans also call for storyboards and Barbra Streisand costumes from the film to be on display.

Fanny’s executive chef, beverage director and pastry chef have yet to be announced, and although the partners declined to discuss menu specifics, Chait said dinner will lean toward American cuisine, while daytime dining will be more globally influenced. The restaurant’s chefs and bartenders, Chait added, might dabble in cinema-inspired dishes and drinks or themed events tied to the museum’s exhibits and screenings, as might the catering menu. (Wolfgang Puck Catering will feature some new items in addition to a number of the celebrity chef’s iconic dishes, many from his quarter century of catering the Oscars, including smoked salmon pizza, mini burgers and ahi tuna cones.)

Reflecting some of the current trends in Los Angeles, Fanny’s will feature a wide selection of natural wine and the cocktail program will include a mix of classic and original cocktails, some of which riff on the city’s history of diverse bars, from the classics-minded Brown Derby to tiki establishments such as Tonga Hut and Trader Vic’s.

Executing that blend of Old Hollywood and new, and doing it well, Chait said, is a challenge, but he and Schuster will benefit from the academy’s collections

“The academy has got more content than anything in the world,” he said. “This is the center of all fantasy. You can imagine when you have that as your partner, it’s sort of endless.”