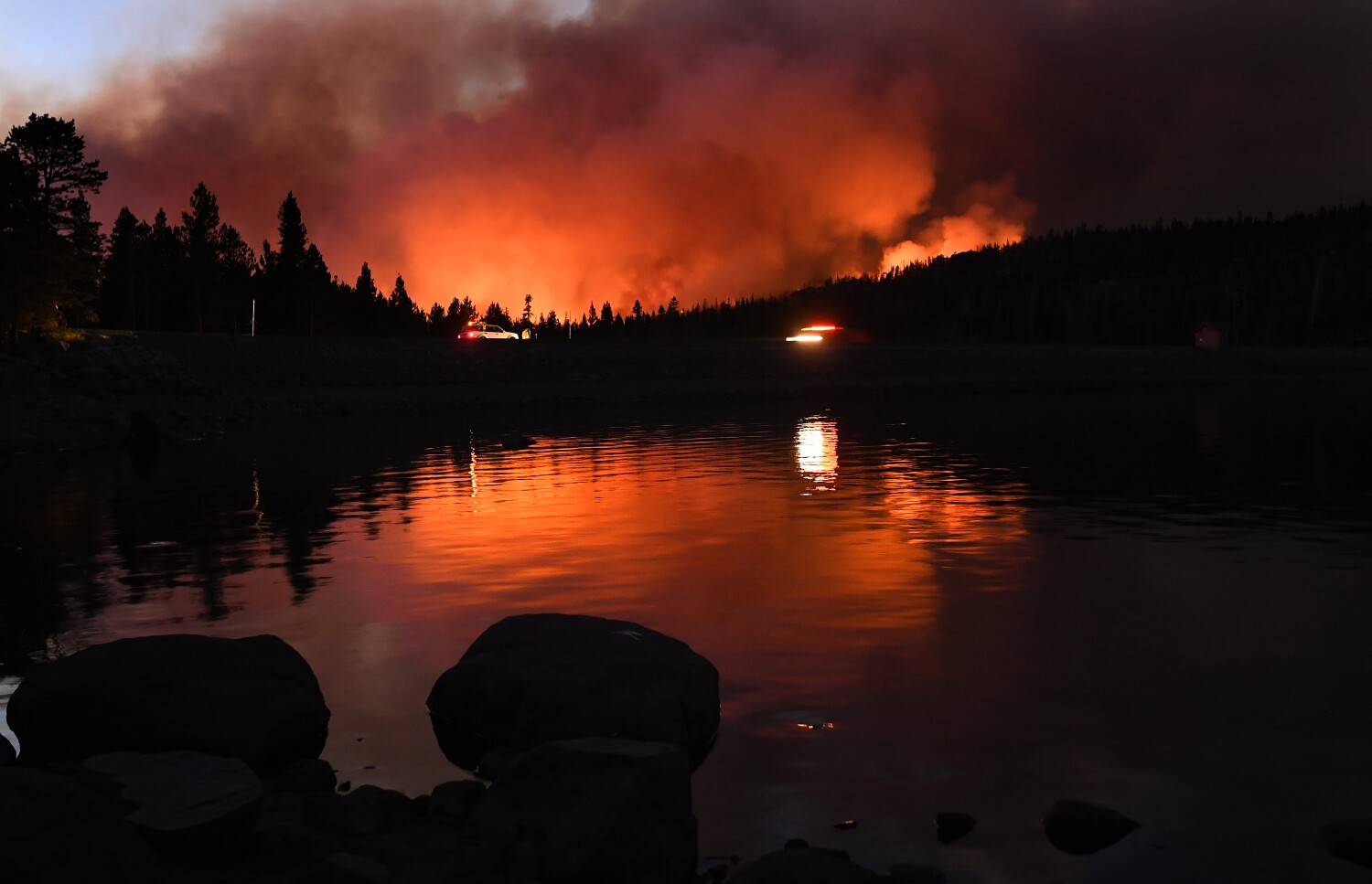 Helicopters thudded high above South Lake Tahoe on Wednesday as columns of thick, black smoke snaked skyward from distant ridges. Fire crews — more than 18 days into the fight against the raging Caldor fire — dug hand lines, bulldozed earth and bombed the blaze with water and retardant in an all-out effort to keep flames at bay.

It all seemed, at least in part, to be working.

The fire roared to more than 200,000 acres in size Wednesday but stayed mostly clear of the popular resort town. Firefighters also managed to protect many of the homes in Christmas Valley and Meyers, both within the Tahoe basin.

Officials confirmed some damage on the outskirts of the Sierra-at-Tahoe ski resort late Wednesday night, said Assistant Chief Jamie Moore, a Los Angeles firefighter working as part of the state’s interagency effort on the Caldor fire.

“They did lose some out buildings, but the main lodge was not damaged,” Moore said.

A cost estimate was not available, he said.

Yet even as officials expressed some optimism, a new possibility was looming as the head of the fire moved east toward the Nevada state line.

As of Wednesday night, the fire was burning about 5 miles away from the state line, Moore said.

“I’d be surprised if it doesn’t make it to Nevada in the next day or so,” said Craig Clements, a professor of meteorology and director of the Wildfire Interdisciplinary Research Center at San Jose State University.

“This is a difficult fire to forecast,” Clements said, noting that it is burning in complex terrain composed of very dry vegetation. “But our model shows it’s going to keep going east.”

By midday Wednesday, firefighters were facing strong winds and bone-dry conditions and battling airborne embers and fast-moving flare-ups, with red flag warnings indicating the potential for wind gusts as strong as 30 mph until 11 p.m.

Strong winds are a major concern for firefighters, as they can send embers aloft and ignite spot fires as far as a mile away, officials said.

Fire behavior analyst Steven Volmer said, given the hot, dry conditions in the area, the probability of an errant ember sparking a new fire was “extremely high” — above 90%. And when fires do start, they can spread at speeds of 200 feet per minute between the crowns of trees, and about 100 feet per minute on the ground, he said.

Beyond the wind, firefighters were also dealing with another challenge, officials said: fatigue. As of Wednesday evening the fire had seared through 207,931 acres and was only 23% contained.

“Whether you have been here for the duration of this incident, you came from another fire or you’ve been covering at home, fatigue can and will set in,” one safety officer told firefighters. “We all know we still have a long grind ahead of us.”

The eastern flank of the fire was a concern, officials said.

“This is where we have a lot of focus,” Cal Fire spokesman Beale Monday said. “All of our resource focus on this side is all broken up into structure protection, and trying to skirt that fire away from the valuables at risk and the communities down here.”

Monday said crews were laying bulldozer lines on the east side of Pioneer Trail and on the west side of Truckee Drive in an effort to keep flames away from South Lake Tahoe. Crews were also removing brush and debris from the side of the highways in the event that they have to ignite a backfire, he said.

Officials were considering opportunities to build a “catcher’s mitt” beyond the immediate fire lines and into Nevada to stop the fire’s march east, he said.

At Heavenly ski resort, near the state border, containment lines made with bulldozers appeared to be keeping the fire at bay. However, on the northern side of the wildfire flames remained active near the picturesque Desolation Wilderness and Wrights Lake. To the South, plumes of smoke rose behind Kirkwood Mountain ski resort as officials used snow spreaders to wet down the area. Fire engines were parked throughout the community, poised to defend dozens of homes and resort property.

Monday said the fire had not yet entered Kirkwood proper, but that “we got another hardship today in there, the winds are real squirrely.”

Dana Walsh, a spokeswoman with the U.S. Forest Service, said Kirkwood remained one of the top priorities for the day. Multiple aircraft and fire crews labored to establish defensive lines as personnel cleared fallen trees along Highway 88.

The original ignition point of the fire — near Grizzly Flats to the west — was still causing some problems, although officials hoped to lift some of the evacuation orders in that area within the next 48 hours. Portions of North Camino and Pollock Pines were downgraded to an evacuation warning late Wednesday afternoon.

Calling it the state’s “No. 1 priority,” Gov. Gavin Newsom said significant resources were being dedicated to fighting the fire, including firefighting aircraft and National Guard troops. Newsom on Wednesday also requested a presidential emergency declaration for direct federal assistance to bolster the emergency response and recovery efforts.

“California stands with Lake Tahoe communities and all the residents impacted by the Caldor Fire,” Newsom said. “We are using every available tool to protect lives and property and urge residents to stay safe and remain alert for instructions from local authorities amid these dangerous fire weather conditions.”

Nevada Gov. Steve Sisolak this week declared a state of emergency “in the anticipation of the fire crossing from California into the state of Nevada in the coming days.”

More than 4,200 personnel have been assigned to fight the fire, officials said, including 44 from the Los Angeles Fire Department.

Evacuation orders have been issued across a wide swath of the area, including South Lake Tahoe and into Nevada’s Douglas County. New evacuation warnings for portions of Alpine County were issued Wednesday afternoon.

Smoke from the fire has also contributed to worsening air quality across the region, with the El Dorado County Air Quality Management District warning residents that the air quality forecast is “very unhealthy” through at least Friday.

But crews may get a break Thursday as red flag conditions are expected to abate, according to incident meteorologist Jim Dudley. However, dry conditions and low humidity will remain persistent problems throughout the area.

Those factors helped the Caldor fire to burn from one side of the Sierra to the other — a feat matched only by the Dixie fire, which has now burned through more than 844,000 acres in northern California. Clements, the Wildfire Interdisciplinary Research Center director, said that unprecedented behavior was yet one more “signal of climate change.”

Though no model or map can say with absolute certainty what the Caldor fire will do in the hours or days to come, Clements noted that ultimately, “these fires burn whichever way the wind direction blows.”

“Generally in the Sierra, we have southwest winds in the afternoon,” he said. “That’s why this fire is so dangerous — because that’s the direction of South Lake Tahoe.”

By dusk on Wednesday, fires burned all along U.S. Highway 50 between South Lake Tahoe and Kyburz, with hundreds of trees still in flames. Fire crews were mopping up spot fires and continuing to hack away at undergrowth and other fuels. Logging of burned trees had already begun.

But on the backroads along Pioneer Trail and the town of Meyers, most houses remained standing, covered in grey black ash but otherwise unscathed.