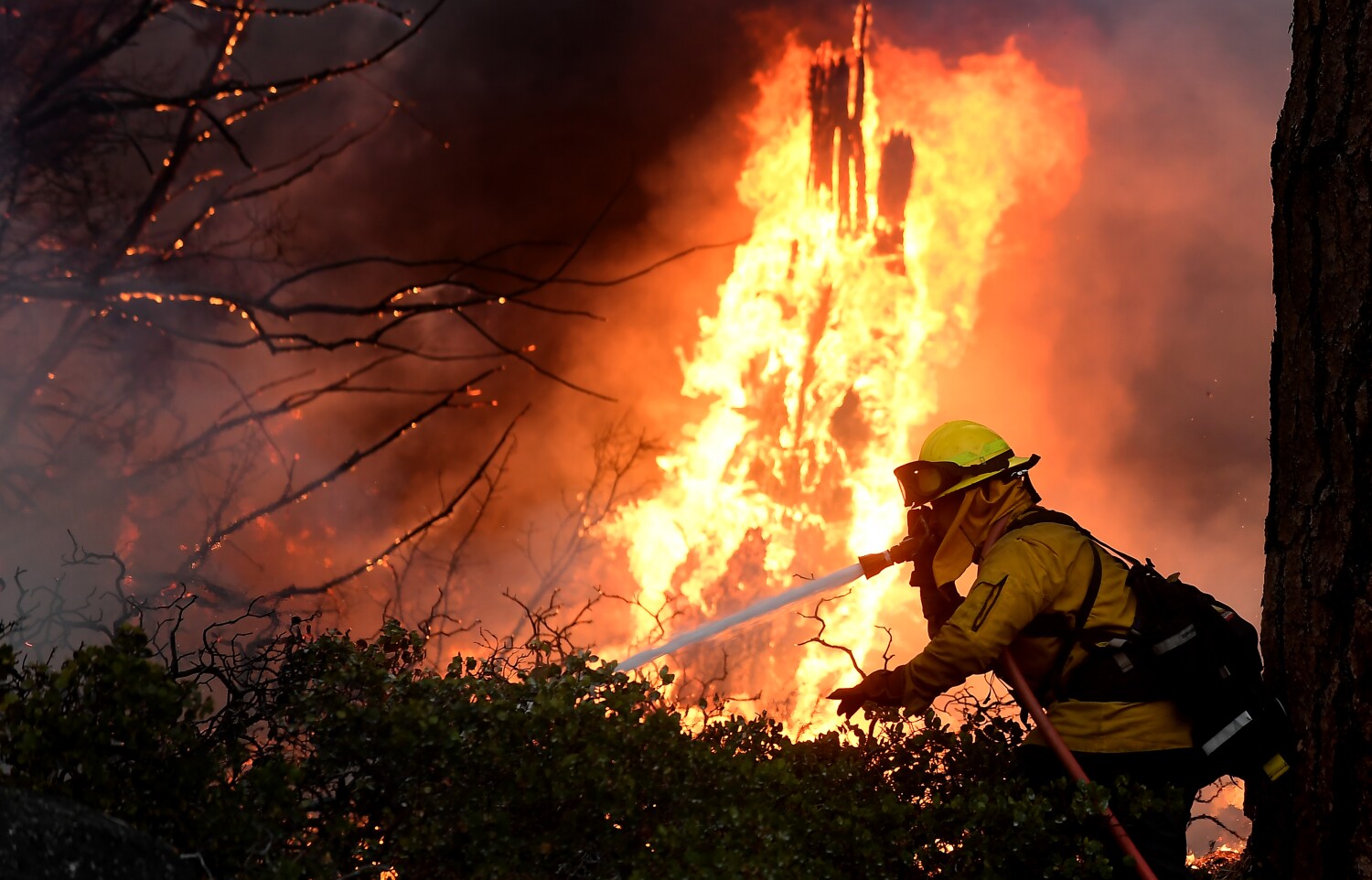 After firefighters spent days defending South Lake Tahoe and tiny mountain hamlets from the rapidly spreading Caldor fire, Thursday provided the first glimmer of hope that a major catastrophe had been avoided.

The subsidence of heavy winds and improved weather conditions allowed firefighters to battle flames from the air and the ground and strengthen defensive lines. In some cases, firefighters even set controlled burns in extremely dry vegetation to deny the fire fuel and to protect homes.

Conditions Thursday were drastically different from earlier in the week, when the uncontrolled fire barreled toward the famed resort city and triggered the evacuation of tens of thousands of people.

“The structures are not threatened right now,” said Marco Rodriguez, an L.A. County Fire Department spokesman working as part of the state’s interagency effort on the Caldor fire. “But that could change any day.”

As Rodriguez spoke, a line of firefighters stood on a hillside, setting fire to pine trees poking out of granite rocks along State Route 89. The rocks had acted as a natural fire break against the blaze when it burned through the area a day before. Now, crews were bolstering that break with a controlled burn.

By Thursday afternoon, the fire had scorched more than 210,000 acres, destroyed more than 800 structures and was 25% contained. It had also prompted President Biden to issue an emergency declaration.

A day earlier, firefighters worked hard to protect the dozens of homes along or near Santa Claus Drive in Christmas Valley, a small mountain community south of Meyers. Firetrucks remained parked on the driveways of homes and in cul-de-sacs on Thursday. Charred trees and rocks perched behind two-story homes showed just how close the flames had come to the buildings.

From Glenbrook to South Lake Tahoe, streets were empty except for the occasional firetrucks and police patrols rolling through. Police and the National Guard were stationed at intersections in Stateline, checking on who was coming in and out of the area. Many homes remained untouched and far from the flames.

Other areas weren’t so lucky. As of Thursday, 622 homes and 12 commercial properties had been destroyed by the fire, officials said. More than 32,000 structures remained threatened. About 30,000 people had been forced from their homes, although officials said that number was dropping slightly as some areas to the west were being repopulated, including Pollock Pines.

Among the evacuees at the Reno-Sparks Convention Center on Thursday was Paul Brooks, 64, of Roseville.

Brooks said he left his home near Sacramento because of wildfire smoke and rented a hotel room in South Lake Tahoe, where he figured the air was cleaner. Four days later, he was forced to evacuate.

Standing outside the convention center, he said he’s seen people break down. Some get frustrated because they want to return home.

“But they can’t because of the situation,” he said. “People are becoming stir-crazy, so I try to keep a positive attitude.”

Brooks considers himself an environmentalist and said he believes that disasters such as damaging fires and floods will persist if people don’t start taking better care of their surroundings.

Experts say fires burning in Northern California are being driven primarily by the dryness of the vegetation. That means that firefighters should expect fires in the region to burn more intensely, spread more quickly and behave more extremely even in the absence of strong winds, according to the National Interagency Fire Center’s Predictive Services. They must also prepare for the possibility that some common tactics, such as using natural barriers as fire lines, may not be as successful because of the fuel conditions.

“We have climate change making it warmer and adding more thermal stress to the forest, making it less healthy,” said Susie Kocher, forestry and natural resources advisor at the University of California Cooperative Extension. “That has led to a lot of tree die-offs and increased fuel throughout the Sierra.”

On top of that, she said, persistent drought means the downed wood and other vegetation are critically dry — in some areas, drier than ever recorded. And forest management practices such as prescribed burning and mechanical thinning have not been performed at a level sufficient to clear out the accumulated material, said Kocher, who was forced to evacuate her home in the South Lake Tahoe area on Monday.

“And so our forests are primed to burn at the same time as we’re experiencing climate change and a terrible drought,” she said. “It’s frightening.”

As of Thursday, the fire was about four to five miles from the border of Nevada, said Jonathan Pierce, public information officer for Cal Fire Incident Management Team 6, which is overseeing the western portion of the fire together with a federal incident management team. Because of its size and complexity, the fire was split into two zones Wednesday night, each with its own command staff.

Fire behavior analyst Steven Volmer said that, given the hot, dry conditions in the area, the probability of an errant ember sparking a new fire remained high.

“The terrain-driven winds are going to be what’s forcing the fire spread today,” he said Thursday.

The winds are generated as the sun heats the ground throughout the day and creates “localized little weather patterns” that are funneled through the topography, Pierce said.

But the conditions were calm and clear enough for firefighters to attack the blaze from the air, with 27 helicopters and three fixed-wing aircraft flying Thursday, he said.

“Yesterday all of our pilots working the fire timed out, meaning they flew as long as they could fly in any one shift,” he said. “So they’re working real hard.”

The Caldor fire, and the Dixie fire not long before it, are the first two in California history to burn from one side of the Sierra Nevada to the other. Authorities have described that behavior as unprecedented.

“That’s coupled with a lot of things: past forest management, as well as warming climate and fuel loading,” Pierce said. “Conditions are getting drier and the forest is getting denser. And those don’t mix well when you have fire on the ground.”

Still, he said, he’s not sure the word “unprecedented” accurately describes the situation anymore.

“If you were looking at the past 200 years, it would be considered unprecedented,” he said. “If you look at the past five years, it would almost seem like the norm because every year we have really large fires. And unless things change, I don’t know if this kind of behavior is going anywhere soon.”