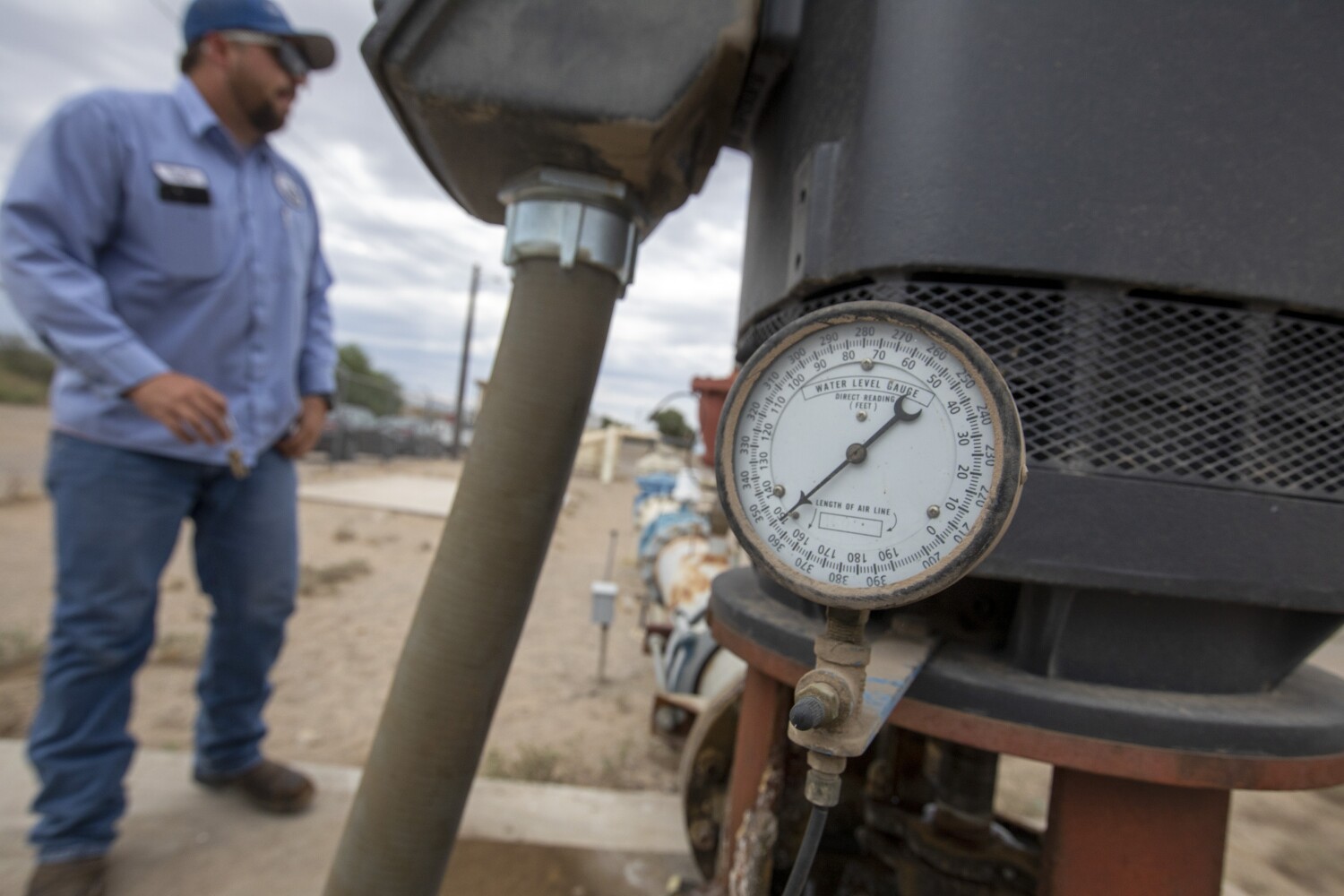 For months, the city of Needles has endured not just scorching hot weather but the possibility that its single water well could fail, a potentially life-threatening risk for this Mojave desert community of 5,000 residents.

Yet over recent weeks, word arrived that state officials — flush with billions of dollars in surplus tax revenue — intend to hand over $2 million to pay for a new well that could be operational later this year. City officials are now breathing easier, even as they prepare for high temperatures this Labor Day weekend of 111 degrees.

Needles is one of the hottest cities in the nation and one of the poorest in California. It has faced what City Manager Rick Daniels calls a “life and death” situation after state officials notified the city that three of its four wells failed to meet state water quality standards.

The city is so short of cash that it didn’t have money for a new well and was instead relying on its single good well that barely met demand. The well failed in late August, after an electronic control panel was fried in a power outage, and the city nearly ran out of water. The city has only 24 to 36 hours of water in storage tanks. City water technicians worked around the clock and restored the pump as reserves were nearly exhausted.

After The Times wrote about the city’s risky situation in July, Sen. Diane Feinstein, along with state legislators, began to put some political heat on the California State Water Resources Control Board to speed up conditional approval for emergency funding the city had sought.

“We got our grant, it is glorious,” Daniels said.

Until Feinstein and others weighed in, the state board was asking that the city modify an environmental report for the new well before they would process the grant, Daniels said. At best the city thought the grant might not come for at least a year, playing blackjack with the residents’ safety.

“We are just a microcosm of the state,” Daniels said. “There has to be hundreds of small rural towns across the state that are in or will be in our situation. Small towns can’t afford staffs of engineers, grant writers and lawyers to deal with these regulations.”

The drought has exacerbated the water supply problems of many communities, putting the lowest-income cities at a disadvantage.

Jay Lund, codirector of the UC Davis Center for Watershed Sciences and a member of the National Academy of Engineering, said the state has about 9,000 regulated public water utilities and many of them are facing serious problems. It is a tough task to ensure there are no cities or towns that have failing water systems.

“You never will,” he said. “There are so many of them and you can afford to fix only a few of them at a time. Even if you try your best, you will miss some problem. There aren’t enough resources to fix everybody’s problem, especially when you get into a drought.”

Lund estimates that as many as 100 public water systems face the threats that Needles faces. “California is a big state and there are a lot of problems,” he said.

Needles received help in navigating the state’s thicket of regulations from a nonprofit coalition of labor unions and contractors, known as Rebuild SoCal Partnership. It attempts to help smaller cities deal with the state’s complex laws governing infrastructure issues.

“Things are falling apart in the state,” said Dave Sorem, an engineer on the group’s board and a vice president of a Baldwin Park construction firm, who went out to Needles to advise them on the problem. “A lot of agencies don’t have a clue about what is happening in small cities.”

Indeed, Daniels, the city manager, said none of the state water officials who were dealing with the city’s requests have ever been to Needles. The county seat is more than 200 miles away and the state senator lives in the Central Valley. Daniels said the situation reminds him of the Jimmy Buffet line, “Don’t try to describe the ocean if you’ve never seen it.”

Indeed, the city is hotter than many renowned municipal ovens, like Phoenix, Las Vegas and Houston. The daily high temperature in August never went below 100 degrees and topped out at 122 on Aug. 4.

The Colorado River flows through town and the city has rights to 1,272 acre feet of water each year. It has historically operated four wells, but starting last fall the water board notified the city that three of the wells were contaminated with naturally occurring minerals, manganese and iron, that exceeded state standards. Then it ordered a corrective action plan in May, which the city said it could not afford.

Manganese is regulated as a secondary contaminant, based on its aesthetics. It causes stains and a bitter taste to water. But toxicologists believe manganese causes neurological disorders, particularly in children, and say it will eventually be regulated as a health hazard.

The new well will be 150 feet to 300 feet deep, located upriver in an area where some private wells have low levels of manganese, Daniels said. It will be connected by a new 16-inch main, running 2,700 feet to the city’s water system. The city hopes to have the well online within three to four months.

When the new well is running, the city will have a 48-hour reserve capacity, still well under the seven-day reserve recommended for large municipal systems in Southern California. Ultimately, the city would like to build another water tank to supplement the three it currently uses, Daniels said.

Among the heavy water users in the city are 14 marijuana growing facilities, which also contribute a fair amount to city finances through cultivation taxes and a 10% local excise tax on production. The city puts tax receipts back into upgrading the water system, Daniels said. For example, Needles is trying to replace aged and leak-prone pipes made of cast iron, asbestos cement and copper. Last year, the system sprung 200 leaks and in one case dumped a half-million gallons of water onto I-40, forcing a partial shutdown.

Needles Mayor Jeff Williams said the few local residents who know about the situation have been understanding. “Luckily, we didn’t have to distribute bottled water,” he said.

Vegan Menu At Threesixtyone, Oberoi Gurgaon: A Plant-Based Meal That Carnivores Will Love Too

5 Vitamin B9 (Folic Acid) Rich Foods You Should Eat Daily