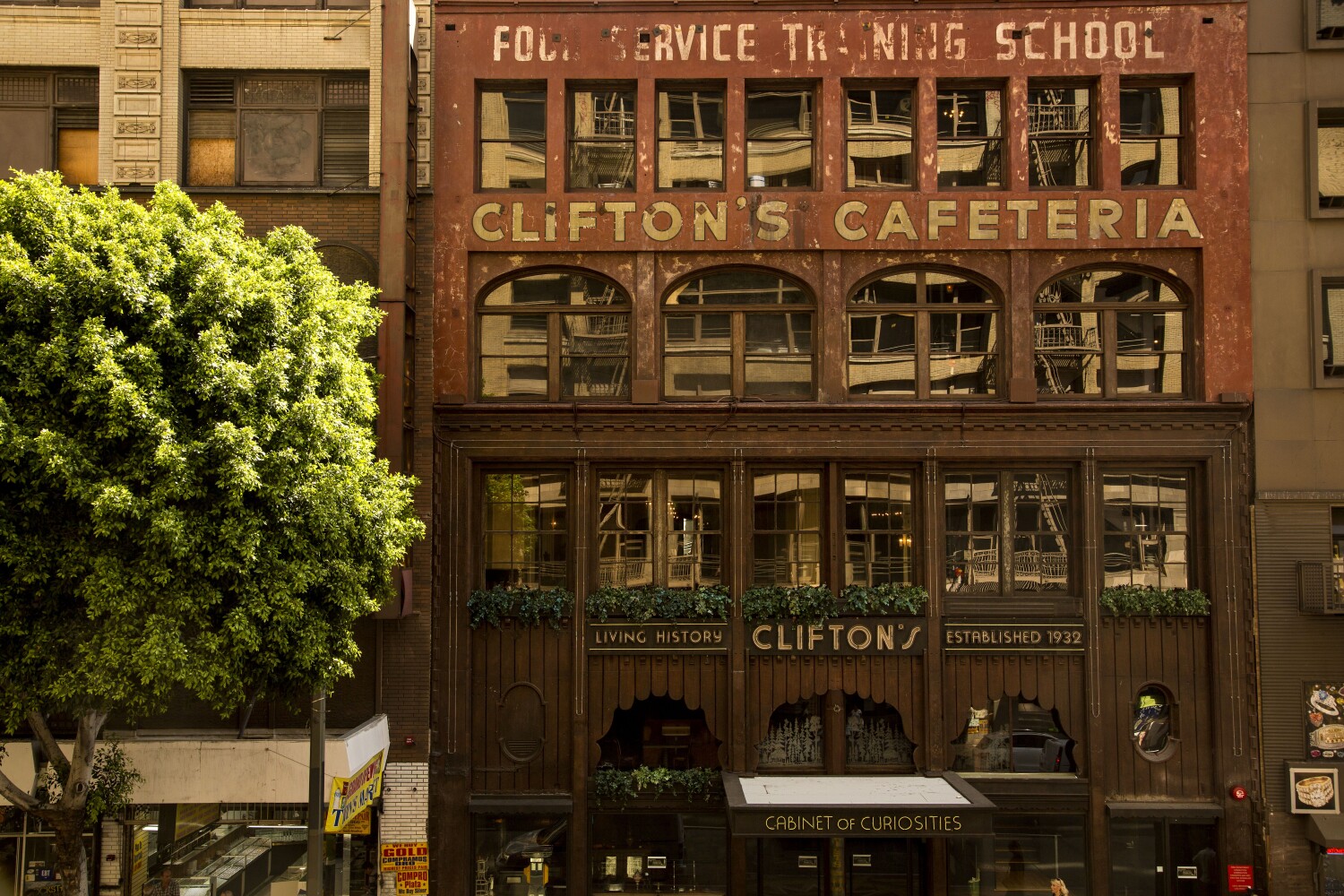 Clifton’s is coming back.

Clifton’s Republic, also known as Clifton’s Brookdale, Clifton’s Cafeteria, or just plain Clifton’s, originally opened during the Depression in 1935. Owner Clifford Clinton (“Clifton’s” is a portmanteau of his first and last names) notably gave away meals to those who couldn’t afford to pay, and at the peak of Clifton’s popularity in the 1940s, 10,000 people a day could file through the doors at 648 South Broadway to enjoy cheap comfort food in an eccentric, woodlands-themed dining room.

Clifton’s is one of eight surviving cafeterias in a chain that Clinton began in 1931. The South Broadway location, situated in a former Boos Brothers cafeteria, was named Clifton’s Brookdale after the Brookdale Lodge in Santa Cruz, which famously had a natural stream running through its Brook Room restaurant.

The venerable downtown L.A. business has had its ups and downs over the past decade or so. Struggling financially and facing declining foot traffic on Broadway relative to its heyday, the Clinton family sold Clifton’s in 2010 for $3.6 million to developer Andrew Meieran, whose portfolio also includes the Edison nightclub, located in the Higgins Building downtown.

Meieran closed the five-story building — plus basement — the following year for a multimillion-dollar renovation before opening it again in 2015. But the cafeteria closed once more at the end of 2018, and Clifton’s remained open as a bar with limited hours.

Clifton’s, rebranded to Clifton’s Republic after Meieran assumed control of the business, was originally just a two-story cafeteria. Meieran expanded the public’s access to three additional levels, which he has carved out into different bars and nightlife venues with names like “Tree Tops” and “Pacific Seas.”

In an interview, Meieran said he’s aiming for a soft-open date of Oct. 15 for a few of those spaces — Pacific Seas on the fourth floor, the Monarch bar on the second floor and Brookdale Ballroom on the third floor. A ticketed grand opening party called “The Afterlife” is planned for Halloween.

The cafeteria, however, will not open until early next year. “It’s the most cramped space with our lowest ceiling,” Meieran said, noting that it would be difficult to open the space responsibly during the current COVID surge. Adults who come to Clifton’s, he added, will have to show proof of vaccination or a recent negative COVID test.

The current plan is for the nightlife venues, which will have limited food options, to be open Thursday through Saturday, with hours expanding “as appropriate or able as far as staffing and COVID concerns go.”

Once the cafeteria does open, there will be a section with the expected classics — meatloaf, stuffing, Jell-O and other dishes you might see at Thanksgiving dinner — as well as a deli and salad station. A noodle bar concept that Meieran describes as “Pan-Asian” will stay open as a late-night dining option.

Having part of the cafeteria automated will take some of the strain off of the labor requirements to run a place as big as Clifton’s, Meieran said. While the restaurant employed hundreds of people at its peak, he added, that is no longer practical nor affordable.

Remaking Clifton’s — again — has been an interesting balancing act, Meieran said, one that requires managing expectations with the realities of functioning as a business. “Part of it you can’t win,” he said. “You’re competing with people’s memories.”

With No Tourist Handouts Because Of COVID, Bali's Hungry Monkeys Raiding Homes