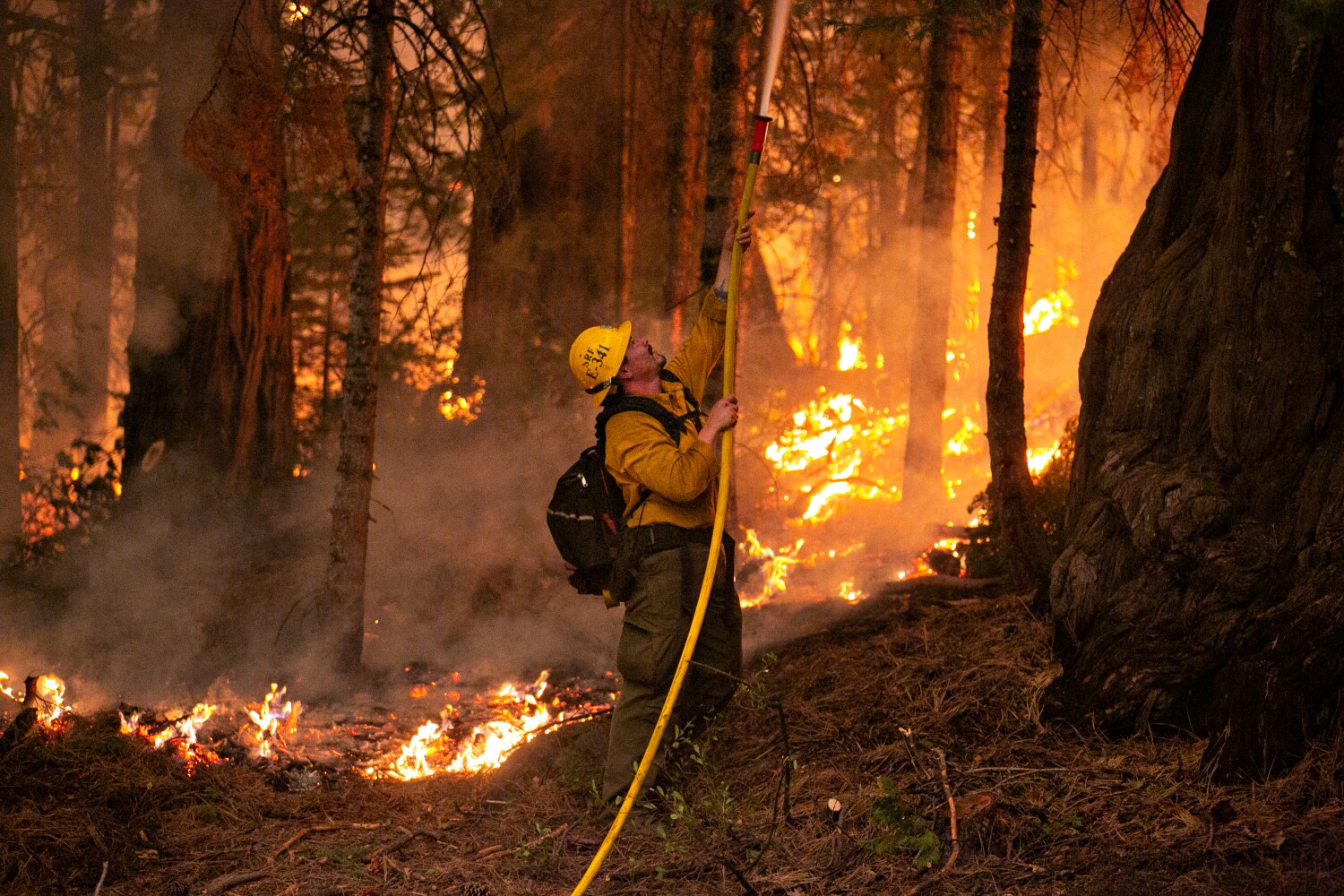 Flames from the Caldor fire moved closer to South Lake Tahoe on Monday night as the entire area was placed under a mandatory evacuation order and firefighters battled to save small mountain hamlets.

Intense winds pushed the fire toward the Lake Tahoe Basin, as firefighters fought to protect ski resorts, small towns and landmarks in its path. Officials had hoped to keep the flames out of the region, but conditions deteriorated as the day wore on.

In an evening update, officials confirmed that the fire moved into Christmas Valley and Meyers, a town about 7 miles south of South Lake Tahoe. Reports also emerged that the fire was sweeping through a Tahoe-area ski resort, the Sierra-at-Tahoe, off U.S. 50 in Twin Bridges. It’s unclear how many structures were destroyed.

The evacuation order covers communities just south of South Lake Tahoe, including nearly all the Lake Tahoe Basin in El Dorado County, from the California-Nevada state line on the lake’s southern end to Tahoma on its western shore.

For days, the big question has been whether the fire will jump the large granite ridge that stands between it and populous South Lake Tahoe. Many residents hoped that the stony topography would act as a buffer.

But Monday’s evacuation order was a worrisome indication that crews could be losing footing on the wind-whipped fire. The National Weather Service has issued red-flag warnings indicating gusty wind conditions in the area through 11 p.m. Tuesday.

Jason Hunter, Caldor fire information officer, said Monday that the fire was still holding to the west of that ridge but worried that strong winds just beginning to pick up could generate spot fires and unpredictable behavior.

In the last few days, the fire has been spotting — or producing sparks that are carried by the wind and start new fires — about half a mile ahead of itself, but crews are expecting that distance to expand to more than a mile on Monday due to wind, he said.

“Our significant concern is that spotting,” he said. Specifically, crews were worried about “embers being blown from up at the ridge top landing somewhere down in the valley and taking hold.”

So far no structures in those areas had been damaged or destroyed, officials said.

Both areas had largely been evacuated along with South Lake Tahoe where those heading east into Nevada were caught in an hours-long traffic jam Monday afternoon.

Some said the road was more like a parking lot as people scrambled to leave town.

“For us, that was a good sign,” South Lake Fire Chief Clive Savacool said. “It meant our citizens were listening to the evacuation orders.”

Chris Anthony, a spokesman for the state’s Department of Forestry and Fire Protection, said Caldor remains a “very active” fire that officials expected to continue its march forward.

Citing factors including climate change and forest maintenance, Anthony said fires such as the Caldor were no longer an anomaly in the West, and said it was “resistant to control.”

According to incident meteorologist Jim Dudley, winds that have been affecting the fire on the ground level will be aided by southwesterly winds aloft due to a changing weather pattern. Gusts on Monday were expected to be as strong as 35 mph.

Although there is still activity on the western perimeter, the majority of growth was on the fire’s northeastern edge, near the town of Strawberry and in the direction of the Lake Tahoe Basin, officials said. By Monday morning, the fire had seared 177,260 acres and destroyed 472 homes.

The fire was 19% contained Sunday morning, but the containment dropped to 14% on Monday morning. More than 20,000 structures are threatened, officials said.

Concern about the potential for disaster is mounting far beyond Tahoe’s typically emerald shores. The fire’s advance has alarmed President Biden’s administration, which has otherwise been preoccupied by Hurricane Ida on the Gulf Coast.

“We are tracking the wildfires,” White House Press Secretary Jen Psaki said at a Monday press briefing. “We will continue to assess if additional resources are needed.”

In addition, the National Interagency Fire Center has requested that about 200 active-duty U.S. Army personnel be deployed to serve as firefighting hand crews. The soldiers were scheduled to be trained over the next week and sent to fire lines in Northern California in early September, the agency said in a news release.

Crews were working hard and fast to get ahead of the flames, but they were met with increasingly erratic conditions and extreme fire behavior.

“It’s burned aggressively all day,” said Eric Schwab, the operations section chief. He noted that the fire had been moving about half a mile each day, but that on Sunday it had “already moved about 2½ miles on us with no sign that it’s starting to slow down.”

“Therefore,” he said, “we resort back to our No. 1 priority: Get people out of the way and protect life.”

Officials urged people to obey evacuation orders and said those under evacuation warnings should gather important items such as medications and be prepared to take action if necessary.

“You need to be aware of what’s going on with the fire and try to keep yourself updated,” said Eric Lee, law enforcement liaison for the incident management team.

Adding to the challenges is the area’s topography, which includes deep drainages and canyons that can act as funnels for the wind and flames, officials said.

Winds have long been the X factor in the state’s extreme fire behavior, officials said, so the forecast for the week could spell trouble for crews and for residents awaiting answers.

“We’ve had spotting occurring with these weaker winds,” said Henry Herrera, a public information officer for the California Department of Forestry and Fire Protection. “So once they reach those [higher] speeds, there is potential for increased spotting, and for the spotting distance to increase as well.”

He noted that before this year, no fire was known to have burned from one side of the Sierra to the other. Both the Caldor and Dixie fire have now achieved that feat.

Will Hearing Aids Ever Be Hip?