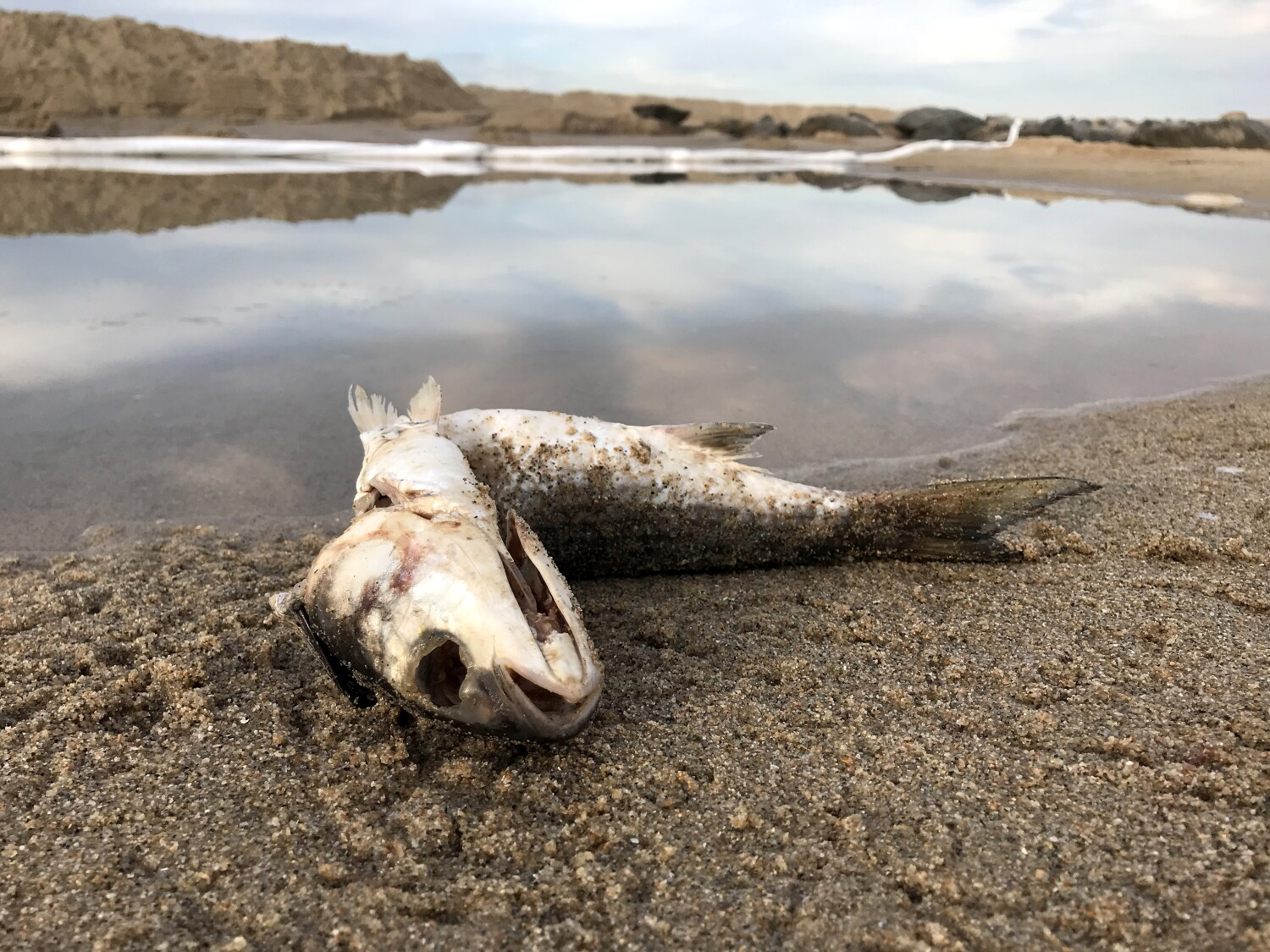 Over the weekend, spiny lobster farmers in Southern California began setting traps for the start of their season. On Sunday, they were suddenly prohibited from entering a swath of the Orange County coastline, and on Tuesday, the banned area was extended even farther — without word on how long fishing will remain off-limits.

Their income from an entire season might have been contaminated in one of the largest oil spills in the state’s recent history.

A 17.7-mile oil pipeline off Huntington Beach has hemorrhaged at least 146,000 gallons into the Pacific since the leak began, possibly Friday, immediately threatening wildlife from sea to shore — and potentially contaminating the fishing grounds and aquafarms that feed Californians and keep hundreds of commercial fishermen employed.

The state Department of Fish and Wildlife has placed a temporary ban on commercial and recreational fishing in an area that stretches about 20 miles from Sunset Beach south to San Clemente and extends six miles out to sea. State officials, fishermen and chefs are scrambling to warn consumers of potential dangers and, in some cases, encouraging them to find new sources of seafood.

“I understand the concern from the fishing community. I understand the concern definitely from the chefs and from the seafood industry,” said Mark Gold, who serves as both deputy secretary for Oceans and Coastal Policy for the California Natural Resources Agency and director of the California Ocean Protection Council. “But for something like this, it’s just so important that we protect public health first.”

Gold says agencies such as the Fish and Wildlife Department and the California Office of Environmental Health Hazard Assessment need more data — including visual and marine-life samples — before they declare the coastline safe to reopen. It could take weeks or months for their findings to be made public.

The seafood industry and its customers are already feeling the repercussions.

Dozens of fishermen who catch lobsters off Orange County can’t access the traps they laid days ago and have only so much time to harvest (the season runs between October and March). They are fearing the longer-term implications, as are the men and women who specialize in other types of seafood and the charter boat businesses that cater to recreational fishermen.

“Not only is it the fishermen and fisherwomen on the boats,” said Mike Conroy, executive director of Pacific Coast Federation of Fishermen’s Assns., which represents 800 to 900 commercial fishermen and women from California to Alaska. “It’s the [hired] boats themselves, it’s the fuel docks, it’s the live-bait providers, the tackle offices. Then when you start talking about the commercial fishing side of it, it’s the buyers and processors, the shippers that truck fish around, the restaurants who might prefer to buy from local harvesters.”

Restaurateurs and home cooks are already voicing concerns about buying seafood caught off Orange County. Some of the fishermen Conroy represents said they’ve decided to cancel their usual weekend appearances at farmers markets for the foreseeable future, due to concern they’ve heard from their buyers — even if their haul is harvested up the coast, as far north as Ventura County, and hasn’t been affected by the spill.

Andrew Gruel says that even when the region’s fishing is allowed again, he’ll wait to buy fish caught or grown off California until its safety is confirmed by multiple organizations. The founder and chief executive of the fast-casual seafood chain Slapfish typically sources 15% to 20% of his California restaurants’ seafood from the Southern California and Baja coasts, often from hyper-local commercial fishermen. Over the weekend, while reading updates on the spill’s spread, he realized that would need to change immediately.

The damage to the marine ecosystem could last months or even years, he said, and ripple throughout the food chain as filter feeders such as oysters, barnacles and mussels accumulate oil, then are eaten by smaller fish and bottom feeders, which are in turn eaten by larger fish that are caught for human consumption.

“We’ll talk about things for maybe a week or so, but this is months,” he said. “We’re going to see effects from this environmentally — and hopefully not from a health perspective, but we just don’t know.”

He doesn’t want to abandon his support of Orange County fishermen, but for the time being, he’ll look to source from other domestic fishing regions, such as the Pacific Northwest and the East Coast — and he recommends that home cooks do the same until assessments of local waters are made public. The spill doesn’t mean avoiding seafood entirely, he said; it simply means consumers should practice more awareness. Frozen seafood, Gruel says, has a bad reputation, but it can be a good substitute if sourced from reputable sellers.

Before founding Slapfish, Gruel helped develop a nonprofit organization with Long Beach’s Aquarium of the Pacific called Seafood for the Future, designed to educate chefs, restaurants and consumers about sustainable seafood. The key to buying seafood is simple, he says, and prescient, given the spill: Always understand the source of origin. When purchasing, ask, “Where was it caught?” “How was it caught?” “Where is it coming from?” and “When was it caught?”

Gruel also warns against line fishing in-coast and on the pier, where areas with lower currents can mean more concentrated contaminants — especially in the weeks and months following any sort of potential contamination event.

“Oil is toxic for us, and I don’t think people really realize that,” he said. “When you look at the photos [of cleanup], people are in these hazmat suits for a reason. There’s so many things it can do, and if you catch fish and it’s got oil in its belly, it affects everything from immune function to reproduction.”

Carlsbad Aquafarm sits roughly 25 miles south of the coast’s current fishing ban (as of Wednesday morning, it was out of harm’s way). Operations manager Matthew Steinke remembers the last major oil spill in his hometown of Huntington Beach, the American Trader oil spill of 1990. He recalls wandering the sand, his parents scraping tar off the bottoms of his feet and warning him not to step on the small black objects that had balled up on the beach.

“Shellfish farms in California are so rare that having a shellfish farm impacted by a spill really hasn’t happened yet,” he said. “There’s a very well-spelled-out procedure for what you look for and immediately stop everything. Everyone has all these procedures in place to shut everything down so nothing bad goes out to the public, but what isn’t clear is: After that step, what’s the next step? How do you determine when something’s safe again? What’s the testing that needs to be done? What labs are certified to do that testing?”

Another question at the front of Steinke’s mind: How long do oysters remain contaminated? Over the weekend, as news of the oil spill spread like the slick, he called oyster farms in the Florida Gulf, which had experienced the Deepwater Horizon spill in 2010, to ask how long their fallout lasted — just in case.

Steinke says Carlsbad Aquafarm, which supplies oysters to Whole Foods, Fish King and a range of wholesale distributors, regularly runs practice emergency closures and recalls to ensure its safeguards are in place in case of a contamination event such as this. The team tests the water daily, and its oyster tissue weekly. For now, the farm appears to be out of the possible contamination zone.

Conroy thinks it’s “logical to assume” that the fishing ban’s perimeter could extend south again, depending on wind factors, currents, and whether the cleanup efforts can trap the surface oil before it spreads farther.

The spill presents a potentially devastating set of circumstances for the environment, for food safety and for entire subsets of commercial fishermen. Conroy and Gruel fear oil spills stigmatize seafood and food safety for years after an event. At Gruel’s Raw Bar by Slapfish in Huntington Beach, he estimates that 80% of his customers ask about the safety of Gulf oysters whenever they appear on the menu, even in 2021 (roughly one decade after the U.S. Food and Drug Administration deemed them safe to eat).

They both urge chefs and diners to heed whatever findings may come from organizations such as the Environmental Protection Agency, the National Oceanic and Atmospheric Administration, the FDA and the California Office of Environmental Health Hazard Assessment in the coming weeks and months.

“The last thing that we want to do is sell a contaminated product to somebody, because that’s a customer that we’ll lose,” Conroy said. “If you go out and eat something that tastes like oil, you’re going to go for chicken or pork or steak. We’re not in the business of trying to scare away customers. We’re here. We’re not the devil, we’re not the boogeymen. We’re just fishermen.”