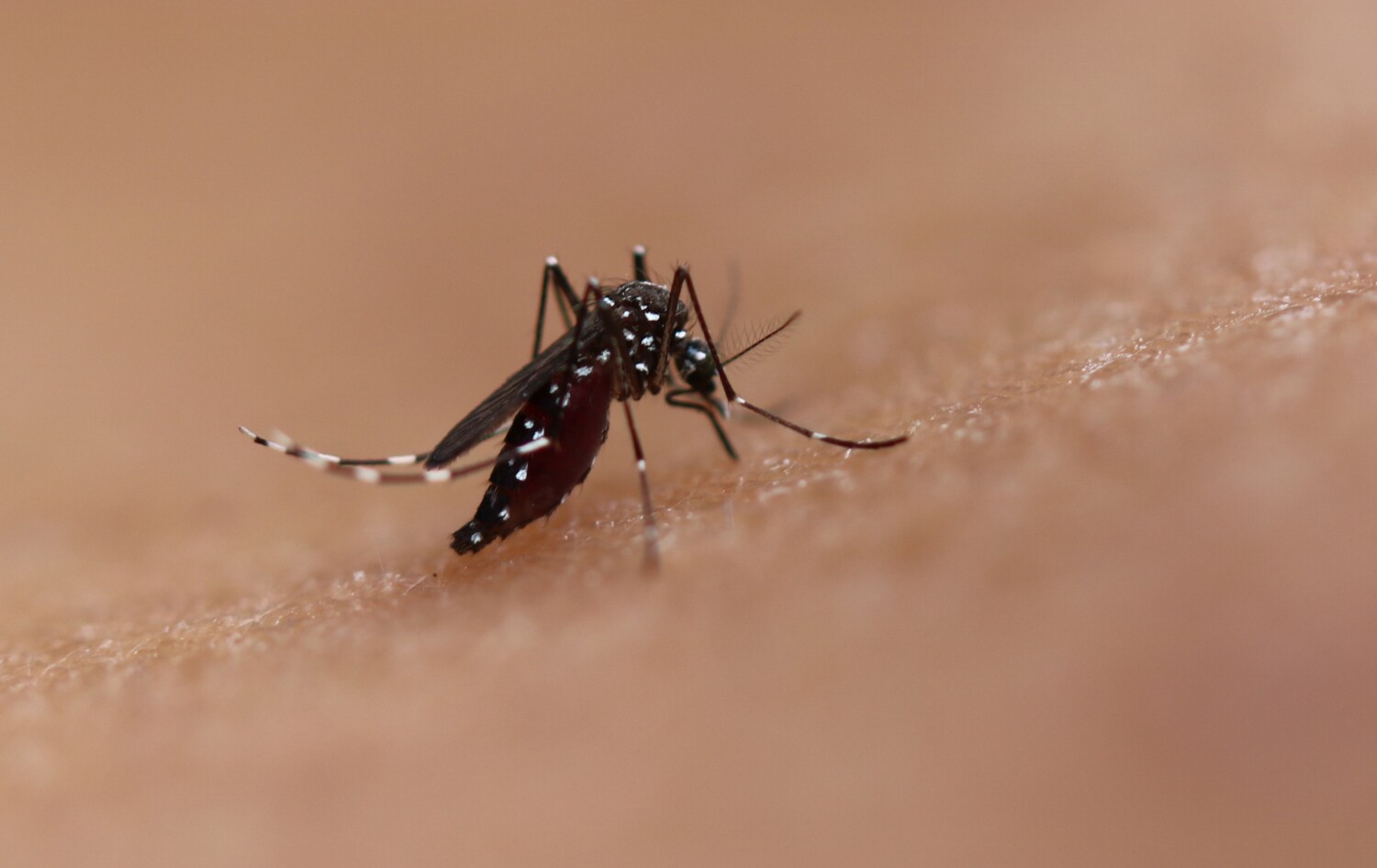 County vector control personnel informed Graham Jenkins and his wife late last month that the itchy bites on their ankles were the work of an insidious mosquito that had invaded their Gardena home — and that there was nothing they could do.

“These little buggers are living with us forever now,” Jenkins, 34, said.

A pair of bites on the 34-year-old’s wrist recently got infected and sent him to the emergency room. After a week of antibiotics, he said he was “almost back to normal,” but still wearing his watch on the other wrist.

The invasive Aedes mosquito is an aggressive biter with the ability to pierce clothing and reproduce in water sources as small as a bottle cap. Flying low to the ground, they strike during the daytime, preferring human blood to that of birds or other animals. They often strike multiple times in rapid succession.

Southern California pest experts say the mosquito is not only here to stay, but its reach — and season — are expanding.

It’s believed that Aedes mosquitoes — which encompass three different species — first hitched a ride to Los Angeles County on shipments of lucky bamboo from China in 2001. But it wasn’t until 2011, when complaints arose in El Monte, that the tenacious insects started to put down noticeable roots.

Since then, the flying bloodsuckers have expanded significantly throughout the county and beyond, and they’re still turning up in new neighborhoods. And when they do, calls from confused — and itchy — residents begin spiking, according to vector control officials.

The mosquitoes this year began showing up in Sunland and Sun Valley, and even as far north as Santa Clarita and Castaic, and residents have been vocal about their plight, said Mary-Joy Coburns, director of communications for the Greater L.A. County Vector Control District.

“This is pretty much the first time a lot of these residents are experiencing these aggressive mosquitoes,” she said. “So they have been calling us, trying to get more information.”

A map of the mosquitoes’ density within the district shows a tiny concentration in South El Monte in 2013. By 2020, that presence had ballooned, saturating almost the entire district on the map.

It’s not just L.A. County that’s seen a meteoric rise in the winged scourge. Areas to the south and north have all reported an uptick in “ankle biters.”

They can’t fly far, but they’re tenacious and “smart,” according to Coburns. A female mosquito might hitch a ride in a car and lay her eggs in the city she gets out in. Some people unwittingly gift plants carrying mosquito eggs. And they’re capable of hopping fences into the neighbor’s yard.

Orange County just recently confirmed the presence of the mosquitoes in every city there.

The insect’s season seems also to be expanding.

“Our campaign was from June to August, and then you’d see relief,” Hyland said, “but that’s not the case anymore.” Now they’re arriving in April and lingering all the way into November, she said.

The insects are most prevalent in September and October, defying the traditional perception of mosquitoes peaking in the summer, according to Levy Sun, director of communication with San Gabriel Valley Mosquito and Vector Control.

Jason Carter, 30, said the mosquitoes are “treacherous” in San Diego, where he lives.

The other week he was reading on a hammock in his backyard patio when he saw one of the creatures whiz by. He ran inside “to avoid its wrath.” But it was too late. He later counted five bites.

Some have wised up to the ways of the Aedes.

John Gary and his family this year have armed themselves with “many devices and medicines and protocols,” the 46-year-old Glendale resident said.

Last year, his son Nicholas, 11, struggled to sleep through the night because of itchy bites that manifested as large welts on his ankles and legs. He had so many marks that they thought they had bed bugs.

Gary slathers himself in DEET bug spray before going out, and the family installed a bug zapper in their dining room. They have also stocked sticks of bite balm, Benadryl, picaridin spray, bracelets infused with citronella and a syringe-type device designed to suck up irritants from bug bites.

Jenkins and wife Jessica Chan have also taken measures to control the pests. They lather up with picaridin, keep fans under their desks, and water their houseplants with the minimal amount of moisture to limit their reproduction.

They’re doing everything right, according to experts, who say repellant and elimination of even minute water sources — where they can breed — are the best ways to manage the mosquitoes.

Eradication, at least for now, is not in the cards.

Aedes can transmit diseases such as chikungunya, dengue and Zika, but they haven’t been linked to an outbreak in California.

They haven’t been tied to a case of the deadly West Nile Virus, either. Meanwhile, their native brethren, the Culex mosquito, have been identified as sources of the deadly virus.

Aedes are considered a “nuisance mosquito” by vector control officials and therefore aren’t of top concern.

Cutting-edge technologies in development could bring local relief — but likely not for several years.

Sun, of the San Gabriel Valley MCVD, said many find the idea “more palatable” than potentially spraying toxic pesticides. Other cities, including Miami-Dade in Florida, have tested the method in pilot programs.

“What better way to target a mosquito than a male mosquito seeking to mate?” he said.

However, Coburns said the technique is “not something on the table right now.” Some of the practices are still under review by the Environmental Protection Agency, and would require regional adoption to work.

Texas Governor Bans All Vaccine Mandates In The State