Actor Neha Dhupia had announced her second pregnancy a couple of months ago. Since then we have seen a lot of her on social media. From hosting Insta lives for expecting mothers to posting pictures of her by showers et al, the actor enjoying this phase of her life. But it’s not all work and parties for Neha Dhupia, food plays an equally important role for the actor as she nears the D-day. Now we don’t know about you, but we sure are entertained by Neha’s foodie shenanigans on her Instagram page. Recently the actor started off her week with some scrumptious bites that she was seen sharing with some friends and family.

First up is an inviting choco-chip cookie that the actor has bitten into. She tagged a friend on this post and said she was saving the rest for her. Look at the adorable picture here: 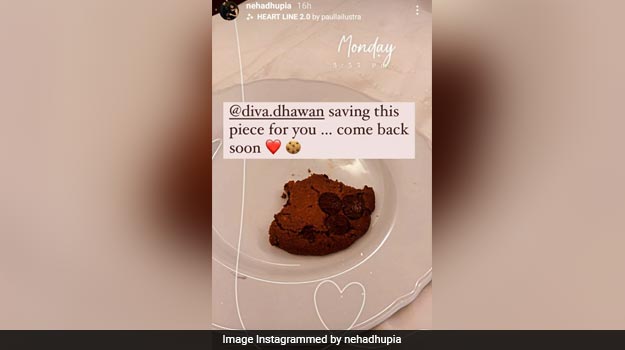 The cookie looks amazing with big chunks of choco chips

That’s not it, just some hours later, the couple was seen enjoying a simple spread of some pepperoni, cheese dip, and chips. Well, that’s some way to start the week. Look at the wholesome spread here:

At this point, it’s no secret that the Dhupia-Bedi household is one that loves their food. From pasta to homemade smoothies, there is an abundance of everything delicious and healthy for the would-be-mother.

On the work front, Neha Dhupia was last seen in an enthralling suspense drama called ‘Devi’. The actor has two new projects up her sleeves, out of which the actor will be seen playing the role of a pregnant cop in one of the movies – ‘A Thursday’.

Soya Stir Fry: Make This Fiery Recipe For Your Mid-Week Indulgence In 30 Minutes

Bizarre Pic Shows Burger Served In A Glass, Reddit Wonders How To Eat It