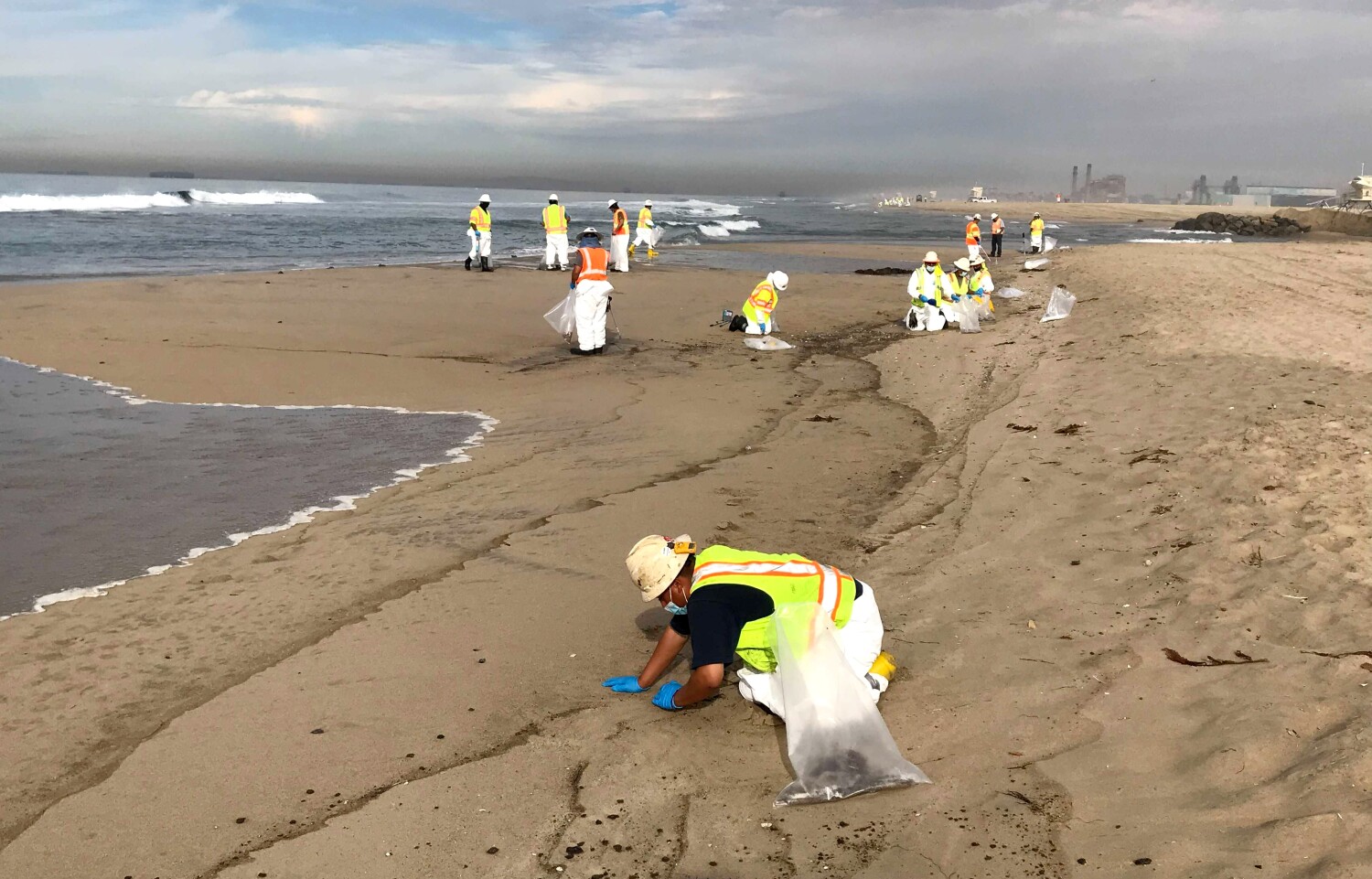 The people who devote themselves to protecting the California coast have been saying it for years:

It’s virtually impossible to prevent an oil spill like the massive crude slick that is now fouling beaches and marine habitats along the Orange County coast.

“There is no way to assuredly prevent human error or mechanical failure,” Richard Charter, senior fellow at the Ocean Foundation, told me in 2018 when the Trump administration was angling to open six regions off the California coast to drilling.

In the Orange County spill, one theory is that a ship anchor clawed and maybe dragged a pipeline, but if so, that’s just one more example of what can go wrong in the process of extracting oil from the ocean.

“We haven’t seen it done safely yet,” Shelley Luce, chief executive of Heal the Bay, also told me back in 2018, as we cruised Santa Monica Bay to discuss the horror a spill would unleash on fisheries.

That same year, a fact-finding cruise to a dozen aging oil drilling platforms off the California coast produced a dire warning from marine advocates.

“So much of that infrastructure is old and corroded,” said Miyoko Sakashita, director of ocean programs at the Center for Biological Diversity. She said there was “not a robust system of oversight” and that the platforms “should have been decommissioned.”

Because of that, Sakashita told me Monday afternoon, news of the weekend spill was not a surprise to her.

If so, what should be done?

Some of the answers are obvious.

Twenty-three gas and oil drilling platforms sit in federal waters off California, dating to a time when climate change was barely an issue, let alone a global crisis. We know now that we’re destroying the planet and have to wean ourselves off fossil fuels. But we’re creeping along as the planet burns, and we lost four years under President Trump’s feckless, head-in-the-sand reign of anti-science belligerence.

But before you pat yourself on the back for being a resident of the progressive state of California, you need to recognize that we’ve got our own flaws. The Orange County spill began in federal waters, and California banned new oil drilling leases up to three miles offshore decades ago. But in the wake of the spill, Consumer Watchdog blasted Gov. Gavin Newsom for his administration’s record in allowing new drilling at the sites of existing leases.

“Gov. Newsom has issued 138 permits for wells located offshore,” said Kyle Ferrar of FracTracker Alliance, which joined Consumer Watchdog in releasing the statement Monday. “This includes five new drilling permits and 133 permits to perform work on existing offshore wells. The oil industry often does this work to address the risks of aging oil and gas wells and infrastructure rather than shut these operations down and clean them up — which is what we should be doing.”

I asked Sakashita what she thought of that, and she didn’t hesitate.

“I agree with that assessment. At its core, California is an oil state, and unfortunately Gov. Newsom is not acting quickly enough,” she said.

When I reached out to Charter on Monday, he was still trying to understand how the Orange County spill wasn’t detected or reported sooner.

“Why do we not know when a pipeline’s pressure drops to zero?” he asked, wondering why the platform operator and federal regulators didn’t get an immediate notice. “Where was the response during the first 24 hours? It’s a day late, at least.”

By then, he said, people on beaches smelled fumes and oil had already floated to shore.

But this type of catastrophe was all but predicted, Charter said, in a report this last spring by the federal General Accounting Office, which found problems with monitoring of potential disaster in the Gulf of Mexico.

“The Department of the Interior’s Bureau of Safety and Environmental Enforcement (BSEE) does not have a robust oversight process for ensuring the integrity of approximately 8,600 miles of active offshore oil and gas pipelines located on the seafloor of the Gulf of Mexico,” the report said.

“Specifically,” it continued, “BSEE does not generally conduct or require any subsea inspections of active pipelines. Instead, the bureau relies on monthly surface observations and pressure sensors to detect leaks. However, officials told us that these methods and technologies are not always reliable for detecting ruptures.”

After the BP blowout in the Gulf in 2010, an epic environmental disaster, it’s unconscionable that such lapses exist, and all the more reason to eliminate the threat of another catastrophe.

Charter told me he’s 100% behind a bill by Sen. Dianne Feinstein (D-Calif.), now in play, that would ban oil and gas drilling off the coasts of California, Oregon and Washington. Regardless of whether that goes through — and if it does, it could take years to implement — Sakashita said dangerously aged drilling operations need to be decommissioned ASAP.

Kristin Carden, a senior scientist who works with Sakashita, said serious regulation and stiffer penalties for screw-ups would help. The company involved in the Orange County spill had been in bankruptcy and piled up numerous noncompliance incidents and violations, but was still in the game, and allegedly proceeding with upgrades at the site of the spill.

Carden thinks that, more important, lawmakers need to aggressively de-incentivize the fossil fuel industry and incentivize alternative fuel industries. Over the long term, there’s no better course, and all the record temperatures, wildfires, drought and flooding make that obvious.

In 1969, the disastrous Santa Barbara oil spill gave rise to a coastal protection movement, but we haven’t gone far enough. In 2015, the Refugio spill near Santa Barbara was another eye-opener, but we seem to have short attention spans. Now we have Orange County, but let’s not forget that this disaster isn’t just about water pollution. It’s about what those oil drilling platforms represent.

“We are pumping greenhouse gases into our atmosphere, leading to a global extinction crisis as well as creating so many healthcare concerns,” Sakashita said. “Humans are so creative, and technology moves so fast. If we have robust policies and demand change, we’ll figure out how to do it.” 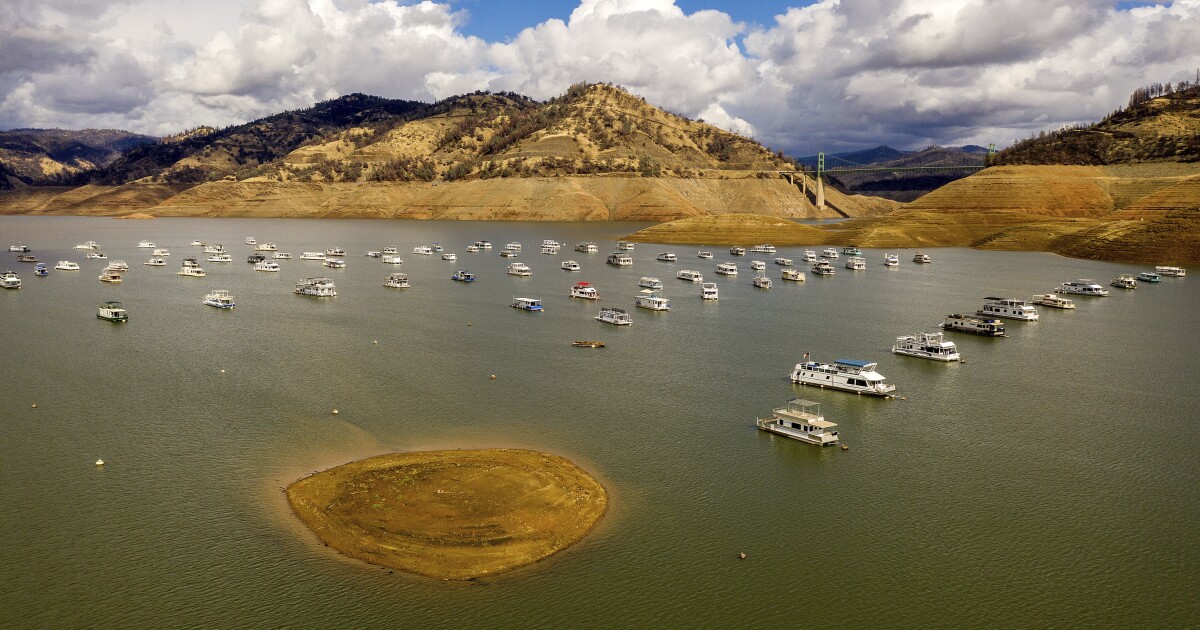