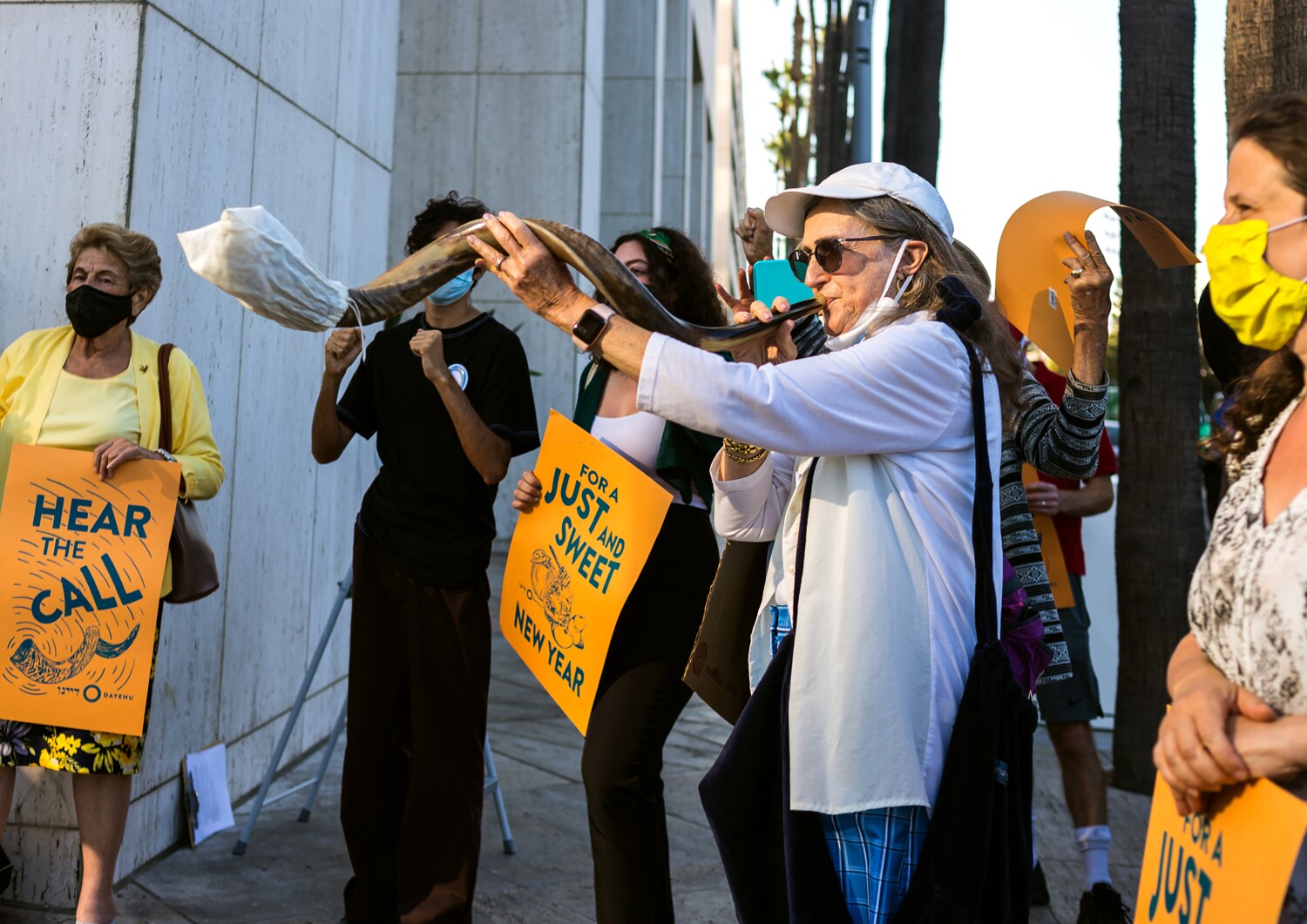 When 70 climate activists stood outside Sen. Dianne Feinstein’s West Los Angeles field offices 10 days ago and blew a shofar, it wasn’t their way of wishing their senator an early Happy Jewish New Year.

One clue? One of their protest signs read, “Sho-far, Not Sho-good.”

The activists were organized by a climate action group called Dayenu — loosely speaking, Hebrew for “Enough!”— part of a campaign that is blowing the ritual ram’s horn across the country to urge Congress to pass President Biden’s $3.5-trillion “Build Back Better” budget bill focused in part on reducing carbon emissions.

The connection between climate change and Rosh Hashanah, the Jewish New Year, which begins the evening of Sept. 6, might not be immediately apparent — unless, that is, you’re familiar with a fairly arcane Jewish custom of “shmita.”

Shmita (rhymes with “pita”) is a sabbatical year on the Jewish calendar, occurring every seven years, including in 5782, which begins Monday evening.

During shmita, Jews are commanded to let the land of Israel lie fallow — the laws only apply to the land of Israel. They may not sow, harvest or even buy and sell crops they produce from the land. They can only pick what grows on its own.

Shmita is set in the Bible: “The seventh year shall be a sabbath of solemn rest for the land, a sabbath unto the LORD; thou shalt neither sow thy field, nor prune thy vineyard.”

Even though there is some debate as to whether the onerous laws of shmita were ever observed exactly as commanded, they are still followed in some fashion by Orthodox Jews in Israel, who have found workarounds to keep food and commerce flowing, such as buying produce from Palestinian farmers — another data point that Arab-Jewish coexistence is likely more mutually beneficial than conflict.

But shmita is increasingly marked by progressive Jews, too — a connection that isn’t hard to understand. This year, shmita follows the latest U.N. Intergovernmental Panel on Climate Change report, which warns that the speed of global warming will lead to catastrophe if we don’t act now to stop and perhaps reverse it.

One message from the United Nations report is that we are past the time when individual actions — my compost, your Tesla, Ed Begley’s house — will make a difference.

“I have some serious difficulty with framing the response to climate change in terms of what ‘I’ can do to contribute to the solution,” UCLA climate policy expert Edward Parson told The Times. “There are some limited ways that individual behavior change can make a non-trivial difference, but climate change is a problem of the aggregate emissions of human activities from 7.5 billion people in the world. ”

And that’s where shmita comes in. It isn’t up to each of us to save the land — shmita wasn’t an individual choice. It was a task mandated for the entire society; the regulations were clear, wrapped in “thou shalts” and enforced from on high: “Now if, after all that, you do not hearken to me,” warns Leviticus 26, “I will continue to discipline you, sevenfold, for your sins…. Your land will not give-forth its yield, the trees of the land will not give-forth their fruit.”

A lot of religions have rituals and ceremonies meant to increase the fertility of the land. What sets shmita apart is that it ritualizes the essential — all farming cultures know the land needs to rest. Neglect the command to take care of the land, and you’ll pay.

Judaism, of course, knows from personal responsibility. Indeed, the prime directive of the New Year is atonement, making good with each person you have wronged so that you can make good with God.

And yet the lesson of shmita makes it clear that when it comes to caring for the Earth, we must act together. Only common action can prevent a tragedy of the commons.

That’s why many non-Orthodox Jews — and non-Jews — have begun to bring attention to shmita as a lever to awaken faith-based activism against climate change.

In fact, the concept can be a corrective to the idea that religion begins and ends with personal faith, the Rev. Susan Hendershot, president of Interfaith Power & Light, told me.

“There is a sense in which we’ve taken on this mindset of, it’s just between Jesus and me, or God and me,” said Hendershot, whose group joined in Dayenu’s shofar campaign, “and climate change requires us to have an obligation to our neighbors, whether they are next door or around the world.”

Shmita is a biblical proof-text that there’s a time to sow, a time to reap and a time — decreed from on high — for society to let nature recover.

And in the wake of a U.N. report that could easily resign us to despair, shmita — and every Jewish New Year — brings another message: It’s not too late. Every year, you can begin again, to change your life, or even save the planet.

A good time to start would be now.

Rob Eshman is national editor of the Forward. @foodaism

Why do partners become emotionally unavailable to each other? | Health News